What a lovely revelation I’ve just had! I’ve noticed that week-in and week-out, one of the most common search phrases used to find The Set Fee Real Estate Blog has been ‘Stand Out.’ What an odd search phrase, and even odder that it leads here! And yet, it is the number one search phrase people have used in the past 30 days to find me and the number two phrase in the past year!

So this morning I decided to do a little investigation. I wanted to find out what people were looking for when they used that phrase and why they were coming to my blog. I went to Google and searched for ‘Stand Out.’ Flipping through the first three pages of results, I saw no mention of the blog . . . so how could people be coming here using that search phrase? Then I thought, maybe they’re not looking for words, maybe they’re looking for pictures! So, with ‘Stand Out’ still in the search box, I clicked ‘Images,’ and searched for pictures tagged with the phrase. I recognized the first picture in the results. I’d used it in a post last year recapping our Help-U-Sell Success Summit. I followed the link, and, sure enough, there was my post.

Mystery solved. But why did my picture bring them here? Because, when I inserted the picture into the post, I’d used ‘Alt-Text’ to describe it. Let me explain.

Google is an amazing thing. It ‘reads’ billions of words of text every moment and indexes it all, evaluates it, assigns a weight to it and then displays it in a logical, ordered fashion. Wonderful! But the Internet is made up of far more than words. Think about all the video that’s out there today! Do you know, when Google comes across a video on the Internet and detects a spoken voice track in it, it will use its own speech-to-text tools to transcribe the audio voice track into text and then scan and index the text just like it does any other written material?! (By the way, that’s an SEO tip for anyone using video on their website: pictures and music are nice, but a spoken word audio track makes your video immensely more ‘findable’)

But what does Google do with pictures? Nothing. It can’t really ‘see’ them – I mean: it knows they are there, but it has no idea what the subject of the picture is . . . . unless you tell it. And that’s where ‘Alt-Text’ comes in.

When you use a photo or other graphic on your website, blog or other Internet posting, you are usually given the option of including ‘Alt-Text.’ You use that option to describe, in words, the picture you are posting. That way, Google knows what it is and can index it along with other Internet content. In my case, I’d used a photo in my post about the Success Summit and I’d described it as ‘Stand Out From The Crowd.’ Interestingly, when anyone does an Image Search for ‘Stand Out,’ they are probably going to see my picture – and it’s good enough that they likely will follow the link . . . and, Bingo! I have a hit. Here is a bit of a screen shot of the photo in the blog post. I’ve hovered over it with my mouse in the shot (I know, you can’t see the cursor, but it’s there), which causes the ‘Alt-Text’ to appear. 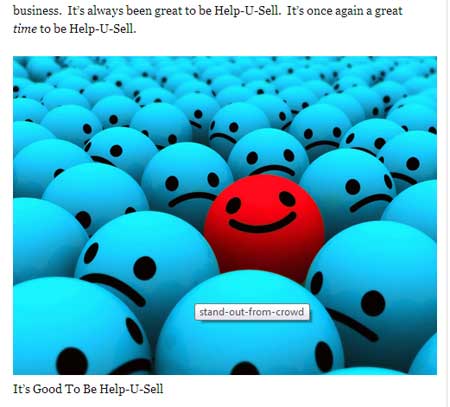 Cool picture, right? But nobody would ever find it if I hadn’t described it for Google with ‘Alt-Text.’ Next time you use a photo anywhere on the Internet, you do the same!