I was just reading about the Arizona Bill, currently headed to the Governor’s office for signature, that would enable businesses to refuse service to anyone on religious grounds.  The bill is designed to allow business owners in the State to refuse service to gay and lesbian citizens, but I assume, could be broader.  I mean:  I’m sure it could be construed as an affront to one’s religion to be forced to  serve a woman in a burka or a man in a turban, or even an African American.

No.  I don’t like the bill.  I don’t like it because it is anti-capitalist.  Our society is constructed around the notion that we are all consumers, all vendors.  We are about offering goods and services for sale to anyone who has the cash and wants to buy.  Any legislation that stands in the way of that goes against the grain of our National DNA.  Besides, how are the business owners who invoke this Bill as a rationale going to tell who’s who?  Are they going to force suspected undesirables to show their secret gay membership cards?  Are rainbows going to be banned?

I think it would be so funny if Michael Sams, the first openly gay football player headed to the NFL, were drafted by the Arizona Cardinals.  Would these uber-religious business owners refuse service to that millionaire? 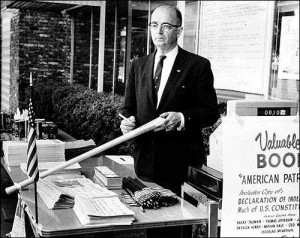 I keep thinking about Lester Maddox, who in 1964 – after passage of the Civil Rights Act – held a group of  3 African American Georgia Tech students at bay outside his restaurant near in downtown Atlanta.  The ax handle he brandished became a symbol of sorts, that he later marketed and (gulp) autographed.  Maddox went on to  be the 75th Governor of Georgia after serving as Jimmy Carter’s Lieutenant Governor.

If the Arizona Bill had been law in Georgia in 1964, I’m sure Lester Maddox could have found some religion that would justify his actions.  But we didn’t think like that back then.  We just thought he was an ignorant racist.  His election proved that he was not alone, not by a long shot.

I started selling real estate around Atlanta in the late 70s.  Race was a hot topic then as increasing numbers of middle-class African Americans sought the better schools and safer surrounds of the suburbs over the blighted inner-city.  Us Realtors were cautioned against something called ‘Block-Busting,’ where a Broker would sell one house in an all-White neighborhood to an African American family and then canvas the area creating fear of falling values and rising crime to take many more listings and make many more sales.

I worked an area East of the city, around Decatur and Stone Mountain (home to a large carving of Confederate Generals riding across the side of the mountain and off into glory), where many brave African American Atlantans  from downtown chose to move.  Often these were my clients.  I remember being impressed.  These were the most American of my clients, working hard and taking risks to ensure a better life for their families and their children.

I remember one man – a UPS employee – I helped to sell a house, buy a better one, then a few years later, buy an even nicer one.  He and his family were special to me because the buyer of that first house he sold?  It was me.  In a 180 degree twist on the Exodus of the day, I did a little reverse Block-Busting, and became the only White resident of an African American neighborhood.  And we all got along just fine.  As Americans we were all interested in the same thing:  Our Property Values.  We all wanted neatly kept lawns,  freshly painted trim and a lower crime rate.

I got a couple of nasty calls from the neighborhood where my friend bought, and a couple of For Sale signs went up – not with me, because I didn’t play that ugly card – but by-and-large, people just went about their business and continued to work to make their neighborhood the best place it could be.  It seems strange to even mention that today, but remember:  this was the Deep South in the Late 70s.  Race was huge.

So huge that in the little town of Avondale Estates, smack-dab in the middle of my area, the local Realtors got together with the city leaders and agreed to ban For Sale signs.  The plan had two objectives.  First, it forced anyone wanting to find a home in Avondale to contact one of the local Realtors (ca-ching!).  Second, it gave the local Realtors the opportunity to screen who they would give the information to.  So, if you sounded African-American on the phone, suddenly there were no homes for sale in Avondale!   For Sale sign bans were quickly the subject of a few court battles and were eliminated.

I opened a real estate office in the distant suburbs:  Lilburn, in Gwinnett County.  It was a growth area with lots of new construction and today is considered close-in.  Back then, it was the sticks.  I remember the day, shortly after I opened, that I was Tested.

The Department of Housing and Urban Development (HUD) was said to occasionally send two sets of ‘buyers’ into the same real estate office, one White, one African American, to ensure that they received the same service.  My Test started with a walk in:  a well dressed White man who quickly told me about his income, his debts and his cash-on-hand and then asked to see 3 bedroom ranches in Lilburn.  I lined up three and off we went to tour.  He didn’t seem very interested in what I showed him and was vague about getting together over the weekend to look again.

A couple of days later, I got another walk-in.  This time it was not a so nicely dressed African American woman with a well-behaved child.  Her financial profile was very similar to the man I’d helped two days earlier and surprise, surprise:  she was also looking for 3 bedroom ranches in Lilburn!  That was easy for me: I’d already done the research for the other guy, so we hopped in the car and drove off to see the same three houses.

I never heard from either buyer again, but I didn’t expect to.  I knew I’d been tested and I knew I passed.  What they were looking for was evidence of ‘steering’:  showing two buyers with similar needs and capabilities different properties based on race.  In general, local Realtors did pretty well with this test, but some well-established members of our real estate community did not.  There were fines and a revoked license or two.

Today I live in Southern California and discrimination seems to have little impact on the real estate market or individual real estate decisions.  Our neighborhoods are diverse and it seems anybody can easily live anywhere.  Again, it’s that Capitalist thinking:  if your money is green, you can buy here, there, anywhere you want!  But I remember when I moved here in the late 80s,  I saw discrimination at times more glaring than what I’d seen in the South . . . only this time it wasn’t directed toward African Americans.  It was directed at Hispanics.  My impression was, if you looked Hispanic and were in Irvine or Mission Viejo . . . well, you’d better have a rake or mop in your hand and a ticket out after sunset.  That was my impression.  Things are very different today.

Discrimination is the decision we make about what is good, what is not so good, what is better and what is best.  Discrimination is a good thing when it comes to food, wine, issues of taste, fashion and culture.  When applied to people, though, discrimination is a terrible thing.  It requires that we look at people not as individuals but as members of a group or class, and to make individual decisions on them based on our impressions of their group or class.  I don’t think discrimination of the human type has any place in America.  Here we create stuff, sell and buy it, and anybody can have a piece of the pie.  Period.

I have one final memory of discrimination and housing I want to share.  It involves a fellow named Otis, who owned 5 acres out in the country a few miles from my Lilburn office.  One of my agents, Carol, had a buyer who was looking for a place to build a house and have horses.  Carol showed Otis’ property and the buyer loved it.  She wrote and offer and took it over to the Seller.  Before she could even begin presenting the details, Otis asked what must have been the most important question he had about the transaction:  ‘What color are they?’  Carol thought for a moment and then said, ‘I don’t know . . . I didn’t ask.’   And she gets a gold star for that one!

And, Governor Brewer?  I’ve got a gold star for you too if you refuse to sign that stupid bill!