Once again, The Franchise Business Review  has included Help-U-Sell Real Estate in its annual list of Franchisee Satisfaction Award winners.  It is our third straight year to make the list.  The list is created after surveys and interviews with current franchisees  and looks at franchisors in a variety of industries.  Making it onto the list means, basically, that our member franchisees are happy with their decision to affiliate, with the guidance and support they get and with the results they achieve.

We aren’t the only real estate franchise to make the list, but there were a few conspicuous absences.  Century 21 didn’t make it.  Neither did ERA or Re/Max.  Keller Williams didn’t make it, nor did Real Estate One.  A dozen of lesser known franchises also missed the mark.

I worked for the other guys in the distant past, always in franchise support, training and business consulting.  The pressure to sell franchises was so great that at times it seemed the only bulls-eye that mattered.  The emphasis on franchise sales (and the absence of anything truly different in the operating system) pushed salespeople into selling fluff, not stuff.  Franchisee dissatisfaction began shortly after Orientation as new franchisees realized that they’d bought very little.

We don’t have that problem at Help-U-Sell.  First, while franchise sales is important, it’s just one bulls-eye and in fact, is not even the most important one.  Secondly, we don’t have a big Franchise Sales department with an unlimited budget.  Most of our franchise sales originate with our existing franchisee base; our members bring in most of our prospects.*  And finally, what we have to sell is stuff:  real, tangible, results producing stuff.  It is different from what they other guys have, works differently, and works better.

A couple of posts ago, I invited curious outside brokers to pick up the phone and call a Help-U-Sell broker – any Help-U-Sell broker – to find out about us.  I made the invitation honestly because I know every broker in our system would wax poetic about the power of the brand, the operating system and the support.  It’s nice to have that belief validated by The Franchise Business Review. 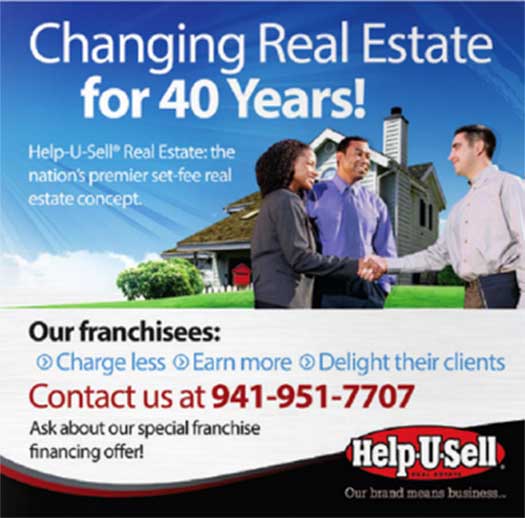 *By the way, Help-U-Sell brokers:  you do know that you are rewarded when the franchise sales prospect you bring in becomes a franchisee, don’t you?  Ask Ron McCoy for details . . . maybe on next week’s Power Hour.