I live 22 miles from the Mexican border and, like many Southern Californians, spend a lot of time in Baja.  One of my favorite drives is the Routa Del Vina — the wine route — that runs from Tecate in the North to Ensenada in the South.  This sixty mile stretch of highway winds first through mountains and then through dozens of Mexican wineries.  Yes, Mexico makes wine.  It’s generally not very good, but they’re working on it.

In the heart of the region, a dirt road takes off to the west from the highway and leads to a dusty little town called Ejido El Porvenir — Town of the Future.   It may have been the Town of the Future in about 1924, but nothing much has changed since then.  It’s mostly just dust and mud, dogs and farmers and tumble down houses, a small, humble church . . . and Beto’s Circo de las Pulgas — Beto’s Flea Circus.

Beto is a weathered old dude who, like everything in Ejido El Porvenir, is dusty.  He’s missing a few teeth but still manages a nice smile when guests stop by. For $4 US, he will lead you through the little house he shares with his granddaughter and her children to the workshop in back where he keeps his Circus.

The show is presented on the bottom of  a 2′ x 3′ corrugated cardboard box with the sides cut down to about an inch that he pulls from a shelf and sets on a rickety table in the middle of the dirt floor room.  He’s painted the box white — well, it was white, once —  and it functions as the stage for his little flea actors.  He’s got one that walks the tight rope, a few that will kick a tiny ball around, one that rides on the back of a green beetle, and three he harnesses to little carts and then implores to race from one side of the box to the other.  It’s both as silly and fascinating as you might imagine.

After the show, I sat a while, chatting with Beto, he using very bad English, me struggling through equally bad Spanish.  I learned he’s 73, been working with fleas for about 10 years, and took it up to pass the time after he became too old to be useful in the grape arbors.  He gets three or four paying visitors a week but also does free shows for the neighborhood kids who regard him as a funny kook.

‘Es Facil,’ he replied; it’s easy.  ‘The hardest part is teaching them not to jump.  A flea can jump two, three feet normally.’

I pictured the house I listed 30 years ago in Atlanta.  It had just been vacated by tenants who had dogs and when I walked into the living room, I was bombarded by a hail of hungry fleas flinging themselves at me from the floor.  They missed their pooches and thought I’d make a suitable substitute.  Yes, fleas have very strong legs and they certainly can leap.  Why didn’t these fleas just leap away?

‘For two months I keep them in a low jar.’  He reached behind him and retrieved a little screw-top container, about an inch and a half tall.  ‘At first they jump and jump in there.  I can hear them bang their little heads on the lid, bing, bing, bing.  But after awhile they adjust.  They still hop, a little;  they just don’t leap.  That’s when I take the lid off and they are ready to train for the circus . . . they’re not going to leap away.’

‘Wait a minute,’ I asked, skeptically, ‘You train their natural tendency to leap out of them?’

‘Sure,’ he said through that almost toothless smile.  ‘After a few weeks of hitting their heads on the lid, they learn to stop jumping, and they’ll never do it again.’

How  sad, I thought.  These creatures were born to leap and they’d allowed him to take that away from them.  I gave him a puzzled look.

‘It’s just like people,’ he continued.  ‘You can train the dreams right out of the people.  If you place enough barriers, enough restrictions, they come to believe their dreams are impossible.  They give up, and then they live quietly in the world you’ve defined for them.  Every dictator knows that . . . I’m just a flea dictator.’ 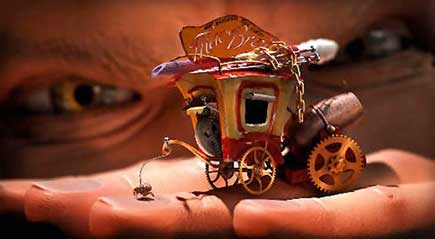 It started to rain as I left Beto’s house.  The  dusty road turned into a mud bog and soon the Jeep was covered in the stuff.  I’d be bringing a little bit of Mexico back across the border with me this night.  As I drove through the gloom, I thought about what Beto said, and about our current reality:  Help-U-Sell, Realtors in general, and the very tough real estate market of the last few years.  We all made adjustments to make it through. We cut expenses, moved to smaller space, consolidated.  They were necessary cuts.  But, like the fleas, we also cut expectations.  Where we once shot for 10% market share and considered 10 deals a month to be ‘just getting by,’  we came to believe that 2 or 3 or 4 a month was ok.  We could get by with 3 or 4 and not bang our heads on the lid of the market.

It’s Spring of 2010.  Look around.  The market is neither bad nor good.  It’s just the market — and it is our reality.  What are you expectations?   Have you let market conditions put a permanent dent in your dreams?  Or can you still see yourself doing 100, 150, 500 deals a year?  You can, you know.  Step by step, stage by stage, phase by phase, you can.  And, truth is, until you believe it, until you expect it, it’s not going to happen.  You’ll just be hopping along, stopping a millimeter or two shy of the lid someone else put over you a long time ago.

It’s time to liberate the fleas!