We all got so granular over the past few years!  And that’s a good thing!

Rather than shotgunning our message all over God’s Green Earth (and paying a hefty toll for the privilege), we started looking at our marketplaces through a magnifying glass.  Instead of marketing by Zip Code, we started breaking down the Zips by Carrier Route.

Most Help-U-Sell offices refined their marketing targets down to 5 to 10 Carrier Routes, depending on turnover rate and budget (That usually works out to 3,000 to 8,000 households).   The problem is, since every Carrier Route has its own turnover rate, it became difficult to know what the OVERALL turnover rate was in your complete target.  Most Brokers just kinda guessed.

Does that make any sense?  You just spent all this time and energy carefully tearing your marketplace apart so that you could construct a productive target.  Instead of doing what most Brokers do (which is to guess or make the decision based on hearsay or gut), you based the whole process on FACTS.  Cold hard FACTS.  And now, you’re going to guess at the turnover rate within your target?  I think NOT!

Those of you in a Coaching Group can use this AMAZING number in the Market Analysis tab of your 12 Month Goal Setting Worksheet, here: 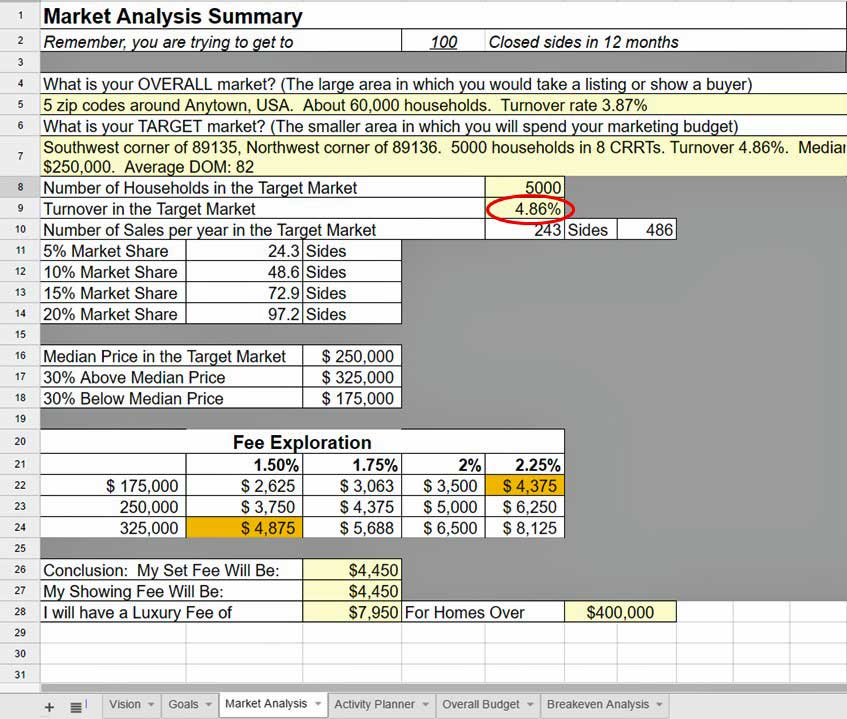 I sincerely hope this keeps you guys from guessing about your business!  And maybe the whole process will intrigue some into investigating the Coaching Group opportunity.  I hope so.  We’ve got openings.

Al had the listing agreement on top of his clipboard and the pen in his hand poised over the blank labelled Listing Price.  ‘So we agree then?’ he asked, ‘We’re thinking $285,000?’

Again, Bob and Carol sat back and looked at each other.  Al watched as a little ridge of skin formed between Carol’s upraised eyebrows.  Darn! he thought, Here we go again!

The emotion never made it to his face, but inside Al was shouting. I didn’t realize we were bargaining over a Louis Vuitton knock off on a Tijuana sidewalk! he thought.  This is nuts!  We’re in a bidding war and the house isn’t even on the market! I should just walk!  But then he resolved to make one more attempt.

‘$320,000?’ he began.  ‘We’re getting closer.  But that’s still, what?’ he reached under the stack of slick graphics now littering the kitchen table and extracted the Market Analysis, ‘About 12% higher than the market will allow.’  Bob and Carol followed his hand back to the facts of record.  Then he pointed to a property in the ‘Currently on the Market’ section.  ‘Remember, this is your competition,’ he said.  ‘It’s brand new, the buyer can choose carpet and colors, and it’s got a two car garage, compared to your car port;  and it’s priced at $284,900.’

‘Yeah,’ said Carol, ‘But not everybody wants a new house . . . ours is cozy and lived in, and the yard is already established.’

Al sat quietly for a moment, thinking.  He knew the worst thing he could do would be to argue with Carol about the merits of her decorating or the condition of the lawn.  Slowly he reached back into the stack of tools in his clipboard. 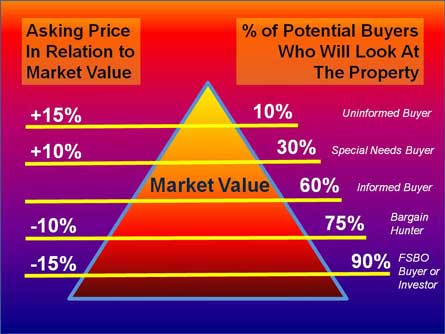 ‘This is the Pricing Pyramid,’ answered Al.  ‘What it shows is when you price at Market Value — which we’re saying is between $275,000 and $285,000 — 60% of the potential buyers for your property will consider it.  40% will either never learn about it for one reason or another or they’ll eliminate for some other reason — perhaps one of their criteria is a garage rather than a carport.’  Once again, Bob and Carol were leaning over, intent on the diagram and following Al’s pen as he directed them through it.

‘Look what happens when you price at just 10% above Market Value.’  Al paused.  ‘ In your case, that would be about $310,000.  You cut the number of potential buyers who will consider your house in half!  And, truth is, you want to go closer to 15% over and look what happens:  finding a buyer for your home is like trying to find a needle in a haystack.’

Al resisted the temptation to go further with his explanation.  He’d made the point and now it was time to let Bob and Carol absorb it.  He started counting: one-Mississippi, two Mississippi, three Mississippi, four Mississippi . . .  And then Bob looked up.

‘Bob, it’s not me,’ answered Al, ‘It’s the marketplace.  That’s what really dictates value and I’m sorry it’s not cooperating in this instance.’  He stopped for a moment and settled back in his chair.  ‘Remember all of that marketing I’m planning to do to get your house sold?’ he asked.  Bob and Carol nodded.

‘I was impressed,’ said Bob.

‘Great,’ said Al, ‘I’m glad you were.  But here’s one of the great truths about marketing real estate:  the most important part of it takes place right here and right now.  We can choose a listing price that lets the marketing do its job; or we can choose one that cripples it and cuts its effectiveness in half.  Since finding the best buyer for your house is a matter of exposing it to the largest number of potential buyers, my strong recommendation is to price it where the largest number will see it:  at Market Value.’

Al watched as Bob reached over and took Carol’s hand.  She looked back at him and Al was certain he saw the slightest nod of her head.  Finally! he thought, We’re going to agree!

The other day, Ron McCoy told me about a broker who had been beating herself up because she didn’t have any REO business.  She kept reading in the newspaper and hearing on the radio what a huge part of the market foreclosures had become.  Why wasn’t she getting any?

All of this gnashing of teeth led this broker to do what Help-U-Sell brokers do in situations like this:  she did a Market Analysis.  Guess what?  Turns out REOS accounted for less than 10% of the business in her target market!  Suddenly all of that energy that was going into stewing and worrying about REOs that didn’t exist could be channelled into capturing as much of her market as she could.

Here at the Set Fee Blog, we did the whole Chicken Little/Foxy Loxy thing a couple of days ago and we all know not to pay attention to the negative press that’s out there.  But why not take it one step farther?  Why not replace the negativity circulating around you with solid market place facts?  Even if REOs are 40% of the activity in your MLS, what’s going on with the 10,000 – 15,000 households where you intend to do business?

As Help-U-Sell brokers, we rely on market data for so many decisions:  where to set our fee, where to target our marketing, when to gear up and when to wind down.  Confusing times, uncertain times, times when all the birds in the barnyard are squaking — these are the times to update your Market Analysis and examine your data again.  You’ll find the full set of forms and instructions you need to do a Market Analysis in the Help-U-Sell Download Library.

(You know:  go to www.helpusell.com, scroll down near the bottom of the page and select ‘Help-U-Sell OMS.’  Proceed to OMS Login and, if you’ve forgotten your user name and password,contact support@helpusell.com.  You’ll find the Market Analysis package in the ‘Marketing and Content’ section, under ‘Operational Tools’ and ‘Office Operational Forms.’  If that’s too many clicks, just drop me a note and I’ll send you the package and even help you fill it out!)

Help-U-Sell starts with a premise:  we are a marketing company.   That’s a heavy concept and it’s pretty rare in today’s traditional real estate world where ‘marketing’ (read: advertising) is done largely by agents (not brokers) and done individually, one house at a time.  It usually goes like this:  the agent gets a listing, promises all kinds of ‘advertising’  and then scrambles to do it in such a way that the impatient seller is placated.  The result is disconnected stuff all over the place, little coordination and little evaluation.

At Help-U-Sell we begin with a thorough analysis of the broker’s target market.  We look at everything we can find about the market place, breaking it down to smaller and smaller units:  zip codes, then neighborhoods, then carrier routes.  Among other things, we’re looking for two significant details:  seasonality and turnover rate.  Turnover tells us where to target our advertising and seasonality tells us when.

Then Target Your Marketing

One of the keys to being successful as a marketing company is narrowing your focus.  You want to target your prescious marketing budget to the group that is most likely to respond and use your service.  the biggest bang for your buck.

For example,  you could target the 400 homes in a particular neighborhood where the turnover rate has been 6% for several years — which means that 24 homes will probably come on the market this year — and try to get , say: 20% of those.  Running campaigns on several target neighborhoods at once can produce much better results than shotgunning your message to the world.

Then Track Your Results

Every time the phone rings in your office with a potential buyer or seller on the other end (or you get an email inquiry),  you have to write it down, count it, keep track of it.  Ideally you get a name, contact information and what caused them to call.  But even  if you never get beyond the fact that they are a buyer or seller, you keep track of how many times potential customers contacted your office.  Source information is critical in evaluating your marketing program and making decisions about where to best spend your dollars.

If you have an easy to use leads managment system, like the one we use at Help-U-Sell, you can look at every bit of marketing you’ve done and see how many leads each piece generated and how many commission dollars were eventually earned.   Ultimately you know whether that homes magazine ad produced $5 for every  dollar you spent or $50, or (gulp) no dollars.  And until you know that  you aren’t in a position to fine tune your market plan.